Taste and tradition: Carmelo Oliveri tells us his secrets to prepare a flawless pizza, even at home! 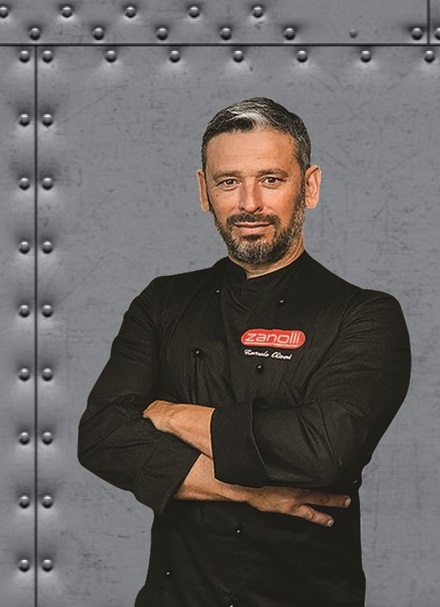 The interdiction to go to the restaurant for several weeks in a row propelled the use of domestic cooking appliances. Thus, our kitchens turned into platform for unprecedented culinary experiments and safety nets when the appetite for pizza grew irrepressible. We asked our collaborator Carmelo Oliveri to share his precious experience in the field of yeast, dough making, and baking: in short, the essential expertise to master the elements and achieve top-quality results even at home.

The Pizza Chef Carmelo Oliveri, regularly starring in our show cooking, is an expert on traditional pizza, “the Queen of Pizzas”, as he defines it. Throughout his 40 years long career, Carmelo had the chance to travel the world and confront the greatest pizza chefs until he became one himself and was appointed Judge at the World Championship. He is currently pizza chef at Borgo della Pizza near Verona.

You are an expert on traditional pizza. Let us rediscover then some of the fundamental elements: leavening, maturation, hydration…

If we talk about traditional pizza, we must first make a distinction between the maturation of the flour, which is the time the flour needs to stay still so that a minimum quantity of sugar is generated internally, and the maturation of the dough, not to be confused with the leavening. By dough maturation, we mean the time during which the dough, once processed, is left to ‘mature’ in the refrigerator, therefore at a temperature between 2 and 4°C. The maturation period can start from a minimum of 24 hours and stretch to over 72 hours.

Water is a fundamental ingredient: it must fit specific organoleptic standards and be drinkable, colorless, odorless, flavorless, and free from harmful bacteria. The ratio between the quantities of water and flour defines the hydration. As the hydration varies, the dough can be more or less elastic and, when cooked, it can taste more or less soft and crunchy. Pizza by the meter, pizza on the pan or traditional pizza… these different types of dough differ by the amount of water compared to flour.

Some advice for homemade pizza?

For the homemade pizza, I recommend 60/65% hydration, that is for 500 gr of flour blend use 300/350 ml of water, 10 gr extra-virgin olive oil, 10 gr salt and 2 – 5 gr of yeast. Set the maximum temperature of the oven, around 250°C. I recommend preparing the dough one day for the next: once processed, put it into a bowl, cover it and let it mature in the refrigerator. The following day complete the process: take it out of the fridge, let it reach room temperature, stretch it onto a tray, let it leaven then start baking with just the tomato on top. The other topping ingredients must be added 5/10 minutes before the end to prevent them from burning. I also suggest placing the tray initially at the lowest level of the oven, as proximity to the heat will help the pizza rise faster, and then after 7-8 minutes move it to the middle level. The pizza should cook in total around 15 minutes.

What are the main differences between dry yeast and fresh yeast?

There are three types of yeast in the market: fresh yeast; baking powder, also used for cakes and bread; dry yeast. The most popular are fresh and dry yeast. Dry yeast is essentially dehydrated fresh yeast. Dry yeast is therefore generally more stable and is mainly used in countries where the weather is hotter. Besides, it lasts longer and has no mold problems or short shelf life. As for the amount of yeast, the most common proportion is 2-5 grams per liter of water. The exact quantity may vary according to the season: for instance 3 grams could be enough in summer because the dough can rise faster, whereas 5-6 grams might be needed in winter, as in cold weather the yeast has a weaker effect.

According to you, what are the mistakes to avoid and the myths to dispel when yeasts and pizza making in general are concerned?

I sometimes see on TV people making up recipes in which water, yeast and salt are added and mixed all together and I can’t help but frowning: mixing together yeast and salt is indeed a big mistake, as salt inhibits the yeast. If you add salt to it, the yeast will yield 3 instead of 10. The right procedure is: water, flour, yeast. Then knead until flour and water form the gluten mesh and the dough becomes a homogeneous and elastic mass. Only then can you add salt and, lastly, olive oil. As for myths to dispel, I can think of the one stating that pizza leavens in the stomach. It is not the pizza that leavens in the stomach, but rather the fact that if the dough has not properly matured in the fridge, it will continue to do so in the stomach. This kind of work generates heat and consequently thirst at night.

Do you have any advice on the choice of the kneader based on the different kinds of dough?

On a professional level, for traditional pizza spiral kneaders are the most commonly used. Some prefer the kneaders with a high number of revolutions per minute. I would recommend the fork kneader if you want to avoid heating the dough too much. For the pizza by the meter or on the shovel, hence for more complex kinds of dough, I would suggest using the dipping arms kneader.

What measures do you adopt to use the ovens in the most efficient way?

First of all, in order to moderate energy consumption, I recommend opening the door of the oven as little as possible. Besides, I believe that it is best to always have at least two baking chambers to face any necessity, be it an increase in productivity, a different kind of product to cook, or a maintenance intervention that might hold one baking chamber temporarily out of service.

Have you noticed any major changes in the way of making dough and preparing pizzas over time?

In recent years I have noticed a general evolution: more and more hydrated dough, more and more sophisticated pizzas… However, it is essential in my opinion not to lose touch with the know-how coming from our past experience. To take one step forward, but one step back too. We should always remember to keep a foot in our past, because it is that foot that propels us to run faster.

Throughout the years, I have reinforced my cooperation with Zanolli and had the chance to use basically the whole range of ovens and machines for pizzeria. I’ve always been very satisfied with the excellent quality/price ratio and with the duration of the equipment over time. In my long experience, I have dealt with countless ovens, kneaders, molding machines… and I always admired how Zanolli stood out as a humble company with great potential, capable of keeping pace with the evolutions in the pizza field and always keen on integrating into its R&D activities all suggestions coming from end users, in order to achieve constant improvement. The company is also endowed with a remarkable technical expertise, which immediately strikes those who use the Zanolli ovens.